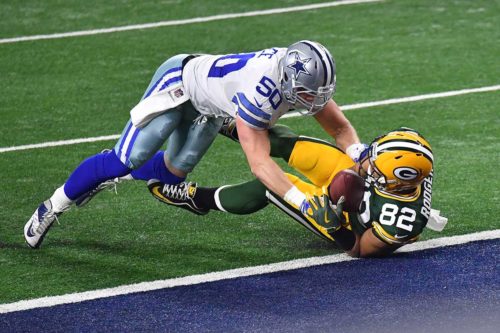 Green Bay Packers wide receiver, Randall Cobb, smiles for the photographer after scoring a touchdown against the New York Giants. Randall had 5 receptions for 116 yards and 3 touchdowns, leading the Packers to a 38-13 victory.

Green Bay Packers tight end, RICHARD ROGERS, makes a diving catch of an Aaron Rogers pass scoring the Packers first touchdown and giving them a 7-3 lead in the first quarter of the NFC Championship game at A&T Stadium. Cowboys linebacker SEAN LEE attempts to defend as the Packers went on to win 34-31.